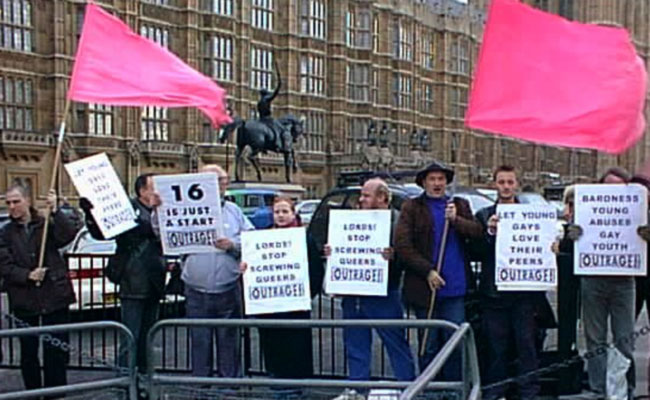 Note that the Labour Baroness Young of Old Scone supports equality, and has stated that the current legal position puts the U.K. in violation of the Human Rights Convention.

LAST Tuesday, the House of Lords again debated lowering the age of consent for homosexuals to 16 and Channel 4 concurrently broadcast the final episode of Queer as Folk. The victorious party of the one damned the whole business of homosexuality as sick, abnormal, unnatural, unclean, inferior and a perversion repeatedly damned in holy scripture of which the inevitable consequence is the breakdown of marriage and mortal danger to society, the other confirming all these Victorian prejudices by having a boy of 15 as a central character and ending in a Götterdämmerung display of manic immaturity. The Lords presented themselves largely as old fogeys embodying the morality of Britain, convinced that family life is the only building brick of our society, its core unit and its feste Burg, while all the young faggots of Manchester, where Queer as Folk is set, are defiantly hell-bent on random buggery — and never the twain shall meet.

Their Lordships’ debate was driven with tremendous energy by Baroness Young, Conservative Life Peeress of 28 years’ standing, there for the usual record of devotion to her party and such service to the public as appointments to the boards of Marks and Sparks and the National Westminster Bank — her peerage a prize example of political patronage far more irksome than the accident of birth and a powerful argument against an appointed House. She stirred the old boys, appointed and hereditary, into a ferment of incoherence, ignorance and intolerance not heard since the debate on the Wolfenden Report more than 40 years ago — indeed, in many ways it was a rerun of that debate, the voices of reason and experience drowned by the babble of outraged bigotry. The survival of antique notions among Lady Young’s supporters was astonishing — homosexuality is a matter of wilful choice, homosexuality is an adolescent phase out of which young men will grow, homosexuals mature slowly and must be given extra time to find themselves — women are women at 16 and heterosexual boys are men, but faggoty boys are only boys — and all boys of 16 will, without a moment’s hesitation or misgiving, bend over for the predatory older man; it is a wonder that we did not hear the old saws that homosexuality can be cured by the love of a good woman, cold baths, devoted attendance at any church or chapel, chastity and abstinence from curry, and that their Lordships did not trot out the old threats of blindness, debility and early death that were once the deterrents to masturbation, or recommend putting homosexuals in the stocks and pillory.

The problem is that they are indeed in the stocks and pillory, put there by themselves for all to see by such look-at-me comedians as Kenneth Williams and Julian Clary, who perpetuate the stereotypes of camp affectation and phallic obsessions inviting mockery, much as did Yiddish comedians long ago seeking to blunt the hostility of anti-Semites. We have heard much of institutionalised racism in recent weeks, but the prejudice against homosexuals is infinitely more established in thought, humour, daily life and language –queer, faggot, bumboy, shirt-lifter, fairy, pansy, poof and poofter– and is still the reason for refusing employment, delaying advancement and turning public sympathy away from a victim. Lord Tope opined that in many ways it is better for a boy to be black than gay, if for no other reason than that he will not have to confess it to his family and friends.

THE word buggery tripped often from the tongues of the most unlikely Lords and Ladies, clearly an obsession, but the age of consent was the true topic of their debate, a simple measure recognising the BMA’s pronouncement that all adolescents at the age of 16 know the nature of their sexuality and giving them the right – not the encouragement – to practise it, homosexual as well as heterosexual. No heterosexual boy of 16 is turned into a faggot by an occasional foray into homosexual activity engendered by curiosity or hunger — the tales of boys’ schools as training grounds for it are arrant nonsense. Most boys at my old school frequently engaged in forms of mutual activity for which opportunities were legion — even in the chemistry lecture theatre, risking the spiteful eye of Mr. Payne — some bullies taking advantage of the few who were more or less open about their sexuality; that this bred generations of inveterate buggers who could not marry for the taste is inconceivable, for most of them married boring wives and entered upon lives of tedious respectability as precisely the family units Lady Young commends.

Lady Young and her antique cohorts clung grimly to their prejudices, Julian Clary, the predatory ogre and sad old men in grubby raincoats, their terrible images of sexual decadence, God, the British Empire and the whole of Islam on their side (clearly none had been to Morocco, Algeria, Tunisia, Egypt or as far afield as Pakistan and been importuned by boys).

They had remarkable opponents, but ignored their wisdom.

The bravest speech of all was made by the Bishop of Bath and Wells, combating those who claimed the Bible as justification for their prejudice, pleading the cause of those who, by nature or nurture, are homosexual, “… struggling with prejudice, ignorance and fear … mental and physical aggression … it is the teaching of the Bible that they should be protected … this is part of the Gospel … by which I have to stand.”