6 May 1998: "Vigil for Equality" outside the House of Commons on the night MPs vote on equalising the age of consent.
Photo: Steve Mayes, OutRage!

5 YEARS’ JAIL FOR TEACHERS IS CONDEMNED AS “DRACONIAN”

Teachers could be jailed for up to five years for consenting relationships with pupils, under the “abuse of trust” clause in the age of consent Sexual Offences (Amendment) Bill.

The abuse of trust clause is being condemned as “draconian” by OutRage!, who are urging MPs to register their disapproval of the clause.

“Sex between teachers and pupils is wrong. But it should be punished as a disciplinary offence under the teacher’s professional code of conduct, not by imprisonment”, according to Peter Tatchell of OutRage!.

“Together with the main teaching unions, we oppose the criminalisation of consensual sex. There is no justification for punishing teachers with up to five years jail for a consenting relationship that may be based on sincere love and commitment.

“Not all such relationships are predatory or exploitative. In the case of a young teacher and an older pupil, there may be only a few years difference in their ages. The relationship could have developed entirely naturally and spontaneously, without any manipulation or abuse.”

Home Office Minister Charles Clarke MP has said that, even after the equalisation of the age of consent, men convicted of consenting gay sex with 16 and 17 year olds will remain on the Sex Offenders’ Register. His admission comes in a letter to Brian Iddon MP, dated 2nd February 2000.

“Under the Sex Offenders’ Act 1997, a man aged 20 who has a consensual gay relationship with a 17 year old is branded a pædophile and required to sign the Sex Offenders’ Register. No such penalty applies to equivalent heterosexual behaviour. Sex between men and women in the same circumstances is not even an offence.

“The age of consent Bill must be amended to remove from the Sex Offenders’ Register men convicted of consenting homosexual relationships with 16 and 17 year olds.

“Once consent is equalised at 16, the offence for which they were convicted and forced to sign the Sex Offenders’ Register will cease to exist. It is therefore inappropriate for them to remain on the Register”, said Mr. Tatchell.

The new Bill fails to protect teenagers against sex abuse

The Government’s proposed Age of Consent Bill, announced at the time of the Queen’s Speech, has been welcomed by OutRage! as the final round in the 32-year campaign to end discrimination in the consent laws.

“Over the last three decades, more than a thousand gay men have been imprisoned for consenting sex that was not a crime between heterosexuals”, said Peter Tatchell of OutRage!.

“A 19-year-old teenager recently served a nine-month sentence for a consenting gay relationship with a 16-year-old. This new legislation will put an end to such injustices.”

But OutRage! is criticising the government for failing to protect vulnerable teenagers adequately against sex abuse.

“Empowering young people with sexual knowledge, skills and confidence is the best way to combat abusive relationships, cut teen pregnancies and prevent the spread of HIV. The lack of Government action to improve sex education is a serious omission from this legislation.”

OutRage! has also condemned the abuse of trust proposals in the age of consent Bill, which penalise adults in a position of authority, influence or trust who have sex with young people in their care

“These relationships are inappropriate, but it is wrong to criminalise consenting sex. Jailing a young teacher for up to five years for what may be a loving, sincere relationship with an older pupil is unjust and draconian.

“Relationships between teachers and pupils may sometimes develop naturally and spontaneously, without involving any element of exploitation or abuse. Such relationships should be dealt with through employment disciplinary procedures, not by criminal sanctions”, said Mr. Tatchell. 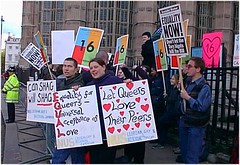 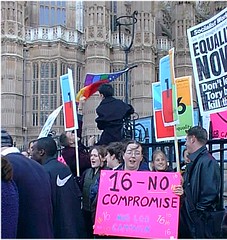 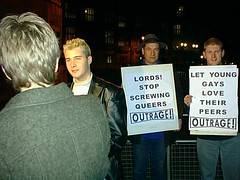 Lords oppose equality again , 13-April-1999
©1999 John Hunt/OutRage! London
This picture may be copied in the cause of furthering our aims, provided that the source is acknowledged.

Note that the Labour Baroness Young of Old Scone supports equality, and has stated that the current legal position puts the U.K. in violation of the Human Rights Convention.
END_OF_DOCUMENT_TOKEN_TO_BE_REPLACED

OutRage! Backs Equality at 16 – Join the Age of Consent Lobby

OutRage! supports equality and is backing the campaign for an equal age of consent of 16 for everyone: gay, straight, and bisexual.

Since September 1998 we have been engaged in an on-going review of issues concerning consent and protection, covering both homosexual and heterosexual relationships.

Equality is our priority, together with better-quality sex education to inform and empower young people of all sexualities to protect themselves against unwanted pregnancies, HIV infection, and sexual manipulation.

In the past OutRage! has championed an age of consent of 14. Our aim was to reduce the criminalisation of young people involved in consenting relationships, and to remove the legal obstacles to earlier, more-effective sex education in schools.

As part of our continuing review of the consent laws, we are still exploring what an ideal age of consent might be. This review includes looking at the experiences of other European countries, where ages of consent vary widely, and at the policies of child welfare groups.

We remain committed to opposing the prosecution of young people involved in victimless relationships and want to encourage a calm, considered public debate about how the sexual rights of young people can be balanced with laws to ensure their protection against abuse.

Sex education can play a major rôle in protecting young people. It should include nonjudgemental information about heterosexuality, homosexuality, and bisexuality, with practical advice on how to refuse unwanted sexual advances, negotiate safer sex, and sustain fulfilling relationships based on mutual consent and respect.

One way to protect young people against sexual abuse is by sex education lessons challenging the notion that sex is something sordid which should be kept hidden, and by empowering young people to stand up for their sexual rights, which include the right to say “no” to sex.

Sexually knowledgeable and confident young people are more likely to resist sexual exploitation than those who are sexually ignorant and ashamed.

Join the Age of Consent Lobby of MP’s and Lords

The second reading in the Commons of the Sexual Offences (Amendment) Bill is expected to be on Monday, 25th January 1999, after which the Bill will go into the Committee stage, returning probably at the end of February for the report stage and third reading.

To ensure that we get another strong vote in the Commons before the Bill goes to the Lords, and to maximise the likelihood of getting the Bill through the Lords, we are asking you to write today to your MP, at the  House of Commons, London, SW1A OAA and also to one of the peers who voted against an equal age of consent last summer, at the House of Lords, London, SW1A OPW

Baroness Young of Farnworth, who organised the homophobic vote in the Lords last summer, claims she has had a very large postbag supporting her stand against equality. You can either write to her at the House of Lords,
or fax her on 020-72.19.31.56,
or sign Stonewall’s electronic petition. Letters should be addressed to “The Rt. Hon. The Baroness Young, DL”,
with salutation “Dear Lady Young”, and signed “Yours sincerely”.

Stonewall’s web site also includes an Age of Consent briefing, together with help on lobbying your MP, and a grab-yourself-a-Lord system, which will allocate you a personal peer, to ensure even lobbying.

If you are able to travel to Westminster, make a note of the following date. —

’16 is not enough! Scrap ALL antigay laws!

Call for “VIGIL FOR EQUALITY” at House of Commons

OutRage! is proposing a mass “Vigil for Equality” outside the House of Commons on the night MP’s vote on equalising the age of consent.

It is suggesting that the new Equality Alliance should organise a huge vigil in front of Parliament, similar to the lobby in 1994; and is proposing that the theme of the protest should be “16 is not enough! Scrap ALL antigay laws!”.

“Winning an equal age of consent will be an important advance”, said John Hunt of OutRage!. “But it will still leave many other homophobic laws unchanged.

“We have got to show the Labour Government that we won’t be content merely with an equal age of consent. ALL antigay laws must go. We will not settle for anything less than TOTAL EQUALITY.

“The politicans must not be allowed to limit gay rights to the single issue of the age of consent. We should use the vote for 16 to push forward the wider agenda of full human rights.

“Many MP’s think we will be content if they just equalise the age of consent. That is most assuredly not the case. We won’t be satisfied until every discriminatory law is abolished. It is vital the lesbian and gay community tells Parliament that one reform is not enough. Equality at 16 has got to be the first step in a rolling programme of homosexual law reform”, said Hunt.

OutRage! wants the protest outside Parliament on the night of the vote to highlight six key civil rights demands: