6 May 1998: "Vigil for Equality" outside the House of Commons on the night MPs vote on equalising the age of consent.
Photo: Steve Mayes, OutRage!

Freedom of speech must be defended, even for homophobes

Charges withdrawn after Tatchell offers to testify for defence

Arrest for anti-gay views is unjustified and heavy-handed

Mr McAlpine, 42, was arrested in a street in Workington on 20 April, after condemning homosexuality as a sin. He was charged with using threatening, abusive or insulting words or behaviour likely to cause harassment, alarm or distress, contrary to the Public Order Act 1986.

See details of the case here:

“Although I disagree with Dale McAlpine and support protests against his homophobic views, he should not have been arrested and charged. Criminalisation is a step too far.

“Despite my opposition to his opinions, I defend his right to freedom of expression.

“Soon after I offered to appear as a defence witness and to argue in court for Mr McAlpine’s acquittal, the Crown Prosecution Service dropped the case. The sudden withdrawal of charges may have been mere coincidence but perhaps not.

“Mr McAlpine should have never been prosecuted in the first place. While the arresting officer may have acted with well-meaning intentions, he was over-zealous and interpreted the law in a harsh, authoritarian manner.

“Although clearly homophobic, Mr McAlpine did not express his opinion in a way that was aggressive, threatening or intimidating.

“I am surprised and shocked that the CPS allowed the case to proceed at all. The Public Order Act is meant to protect people from harm. Dale McAlpine’s views are misguided and offensive but I see no evidence that they caused harm to anyone.

“I urge the Home Secretary, Theresa May, to issue new guidelines, making it clear that the police should not arrest people for expressing prejudiced views in a non-threatening and non-aggressive manner. Prosecutions should only proceed in extreme circumstances. The police should concentrate on tackling serious, harmful crimes, such as racist, homophobic and sexist violence.

“Causing offence to others is not a legitimate basis for putting a person on trial.

“Nearly everyone holds opinions that someone else might find offensive. If offending others is accepted as a basis for prosecution, most of the population of the UK would end up in court.

“Freedom of speech means accepting the right of other people to say things that we may find disagreeable and even offensive. Unless people make untrue libellous comments or incite violence, they should not be criminalised for expressing their opinions,” said Mr Tatchell. 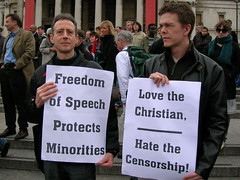 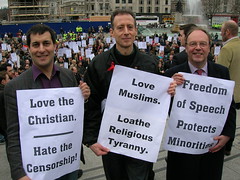 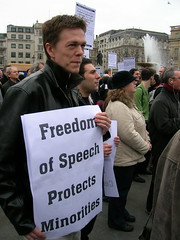 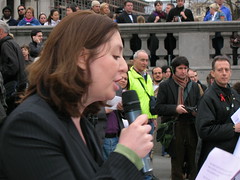 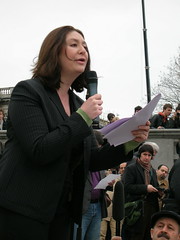 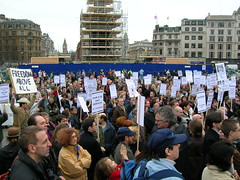 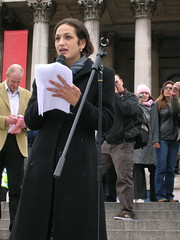 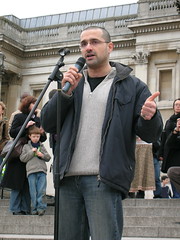 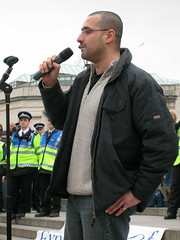 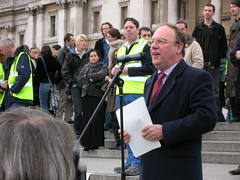 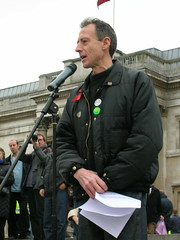 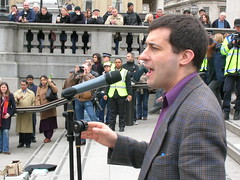 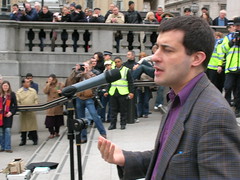 © OutRage! 1990-2010. You are free to use this photo to illustrate news stories and articles about OutRage!, the lesbian and gay human rights group, with credit to the group and photographer. For all other uses, please inquire. Photos: Brett Lock, OutRage!

Tatchell fights to defend the right to peaceful protest

Gay rights campaigner Peter Tatchell of OutRage! plans to make his court hearing a “civil liberties test case” when he appears at Canterbury Magistrates Court this Friday, 15th May, at 9:45 a.m..

He is calling for the repeal of the law under which he has been charged, arguing that “it gives the Church privileged immunity from public protest and dissent”.

The charge against Tatchell arises from OutRage!’s Easter Sunday protest in Canterbury Cathedral on 12th April 1998. Interrupting the sermon of the Archbishop of Canterbury, Tatchell condemned Dr. Carey’s support for discrimination against lesbian and gay people with respect to employment, the age of consent, fostering and marriage.

“I will fight the prosecution on the issue of free speech”, said Tatchell. “The right to peaceful protest does not stop at the door of a Cathedral.

“Under this ancient law, the Church has privileged protection against protest. No other institution is granted these special, sweeping powers to suppress dissent. It should not be a crime to criticise the Archbishop of Canterbury in his Cathedral.

“What is at stake in this case is the precious, hard-won freedom to demonstrate. If the prosecution win, it will be a defeat for civil liberties and a victory for authoritarianism.

“The restrictions on the right to protest under the Ecclesiastical Courts Jurisdiction Act are incompatible with a democratic society and should be repealed”, said Mr. Tatchell.

OutRage! is appealing for contributions to the Peter Tatchell Defence Fund.

“We need financial help to fight this prosecution”, said David Allison of OutRage!. “Peter’s case is an important test of civil liberties. We must defend the right to peaceful protest and resist this attempt to stifle freedom of speech”.

Update
At the preliminary hearing on 15th May, the case was adjourned till 5th June.

At the hearing on 5th June, the case further was adjourned till 12th June.