A gay couple’s application for a civil marriage licence was today refused by Northampton register office.

Matthew Toresen (48) and Scott Maloney (42) applied for a civil marriage, in a direct challenge to the ban on same-sex marriages.

They were turned away on the grounds that UK law since 1973 stipulates that marriage partners have to be male and female.

“We’ve been together for 18 years and love each other very much. We want to get married. It means a lot to us. Although this rejection is hurtful, it is just a temporary setback in the long struggle for marriage equality. Next month, together with other couples, we will bring a joint legal action in the courts to challenge the ban on same-sex marriage.”

“We’re obviously disappointed but the fight goes on. Next stop the courts. We feel confident that the ban on gay marriage will be overturned. It is against the spirit and letter of the Human Rights Act. We are proud to part of this historic campaign for equal rights.”

See more quotes from Matthew and Scott towards the end of this news release.

Photos of Scott and Matthew at Northampton register office: 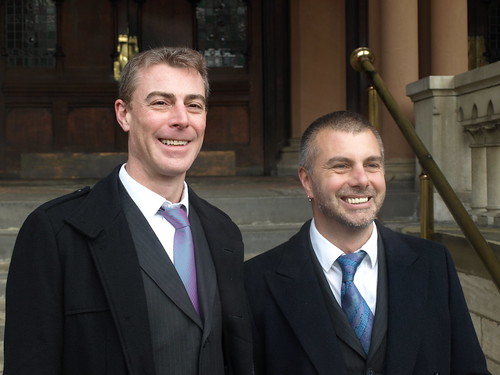 These photos are free to use, without charge, but please credit Brett Lock.

The couple’s bid is part of the new Equal Love campaign, which is seeking to overturn the twin prohibitions on gay civil marriages and heterosexual civil partnerships.

“Mathew and Scott are the third of eight couples to challenge these twin bans. The first couple, Rev Sharon Ferguson and Franka Strietzel, had their application for a same-sex marriage turned down at Greenwich register office on 2 November. The second couple, Katherine Doyle and Tom Freeman, were refused a heterosexual civil partnership on 9 November at Islington register office,” said Equal Love coordinator Peter Tatchell.

“We expect that all eight couples will be turned away. They will then launch a joint legal action to end sexual orientation discrimination in civil marriage and civil partnership law.

“We see the Equal Love campaign as a historic quest for justice; morally equivalent to the campaigns to overturn the bans on inter-racial marriage in apartheid South Africa and the Deep South of the USA.

“A similar ban on black marriages would provoke an outcry. So why should the ban on gay marriages be tolerated?

“The bans on same-sex civil marriages and opposite-sex civil partnerships are a form of sexual apartheid – one law for gay couples and another law for heterosexual partners. Two wrongs don’t make a right,” said Mr Tatchell.

“By excluding same-sex couples from civil marriage, and different-sex couples from civil partnership, the UK Government is discriminating on the ground of sexual orientation, contrary to the Human Rights Act. The twin bans violate Article 14 (protection against discrimination), Article 12 (the right to marry) and Article 8 (the right to respect for family life),” said Professor Wintemute.

“The rights attached to civil marriage and civil partnership are identical, especially with regard to adoption of children, donor insemination, and surrogacy. There is no longer any justification for excluding same-sex couples from civil marriage and different-sex couples from civil partnership. It’s like having separate drinking fountains or beaches for different racial groups, even though the water is the same. The only function of the twin bans is to mark lesbian and gay people as inferior to heterosexual people,” he said.

“We’ve been together now for over 18 years. Our love for each other is as valid as anybody else’s. We made a decision not to become civil-partnered because we feel that gay marriage is worth fighting for.

“It seems nonsensical to me that my two brothers are married to the women they love but that Scott and I are denied this social legitimacy and celebration.

“If the state is going to offer options about how relationships are recognised, these options must be available to all. The current situation is absolutely discriminatory, and must end,” he said.

“Language does matter. Marriage is universally understood as a meaningful commitment. People might say that in time civil partnerships will mean exactly the same. We say: ‘Why wait?’ Opinion polls already show that the majority of people in Britain support same-sex marriage.

“It seems to me morally right that we all should have the same compact with the state. As a gay man, I am expected to pay taxes, obey the laws and, if necessary, defend this country like everybody else. In return, I expect the state to treat me equally”

“The fact that we have separate institutions for gay people and straight people creates an artificial divide, rather than acknowledging that commitment and love are universal,” he said.

“Our legal team will argue in the courts that the bans on gay marriages and heterosexual civil partnerships are unlawful and unjustified discrimination.

“In a democracy, gay and straight couples should be equal before the law. Both civil marriages and civil partnerships should be open to everyone without discrimination,” he said.

“Our aim is to secure equality in civil marriage and civil partnership law. We want both systems open to all couples, gay and straight, so that everyone has a free and equal choice.

“Same-sex marriage is the growing trend all over the world. It exists in Canada, Argentina and South Africa, as well as seven of our European neighbours: Portugal, Spain, Belgium, the Netherlands, Sweden, Norway and Iceland. We want marriage equality in Britain too.

“Political support for ending the ban on gay marriage is growing. London Mayor, Boris Johnson, and former Conservative Party Vice-Chair, Margot James MP, have both come out in favour of allowing lesbian and gay couples to marry in a registry office, on the same terms as heterosexual partners.

“This view is also endorsed by the leader of the Labour Party, Ed Miliband, and by the deputy prime minister Nick Clegg of the Liberal Democrats.

“Both the Liberal Democrat and the Green party conferences have voted overwhelmingly in favour of ending the bans on gay civil marriages and heterosexual civil partnerships,” noted Mr Tatchell.

Public attitudes have shifted strongly in favour of allowing gay couples to marry. A Populus opinion poll in June 2009 found that 61% of the public believe that: “Gay couples should have an equal right to get married, not just to have civil partnerships.” Only 33% disagreed.