The Metropolitan Police in London are investigating a complaint of alleged assault on Russian gay activist and journalist, Nikolai Alekseev, by a member of the Mayor of Moscow’s staff.

The incident happened following the press conference given by the mayors of London, Berlin, Paris, Moscow and Beijing at City Hall in London on 28 February.

According to Mr. Alekseev, Sergi Tsoi, the press secretary of Moscow Mayor Yuri Luzhkov, apparently took exception to him unfurling a flag featuring the rainbow-coloured Moscow Pride logo. Tsoi grabbed the flag and aggressively attempted to wrest it from Alekseev.

To view the programme and the incident with Mr Alekseev, see:
http://news.ntv.ru/104695/

Mr. Alekseev said he had reported the incident as a homophobic assault to the Metropolitan Police at Uxbridge police station in west London on Saturday 3 March. A spokesman for the police has confirmed to the editor of UK Gay News, Andy Harley, that officers are “investigating a report of an alleged assault at City Hall.”

Speaking from Moscow, Mr. Alekseev commented: “In Russia, people of such high standing get away with such incidents, but in Britain there is a slightly different perception of law.

“According to British law, Mr. Tsoi appears to have committed a crime. He should be held responsible for his actions. Although he has returned to Moscow, if he comes back to Britain he should be interviewed by the police and charges should be laid against him.

Gay human rights activist, Peter Tatchell of Outrage! in London, who was demonstrating with others outside City Hall against the Moscow Mayor’s banning of Moscow Gay Pride, described the incident as “thuggish bullying” when he saw the television footage.

“It reveals, yet again, the repressive, authoritarian nature of the Mayor of Moscow’s regime,” said Mr Tatchell.

“Mayor Luzhkov may be able to muzzle free speech and the right to protest in Moscow, but he cannot get away with such tactics in London.

“It was exceedingly discourteous for a member of Mr Luzhkov’s staff to abuse the hospitality of the Mayor of London in this way.

“The mistreatment of Mr Alekseev was filmed by TV crews. It provides irrefutable evidence. I hope the London police will press charges,” said Mr. Tatchell.

Free photos of the London protest against the Moscow Mayor, see here: 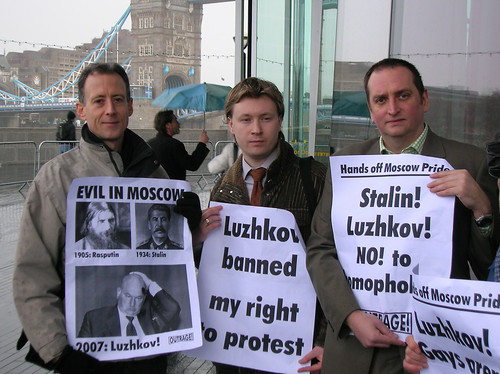